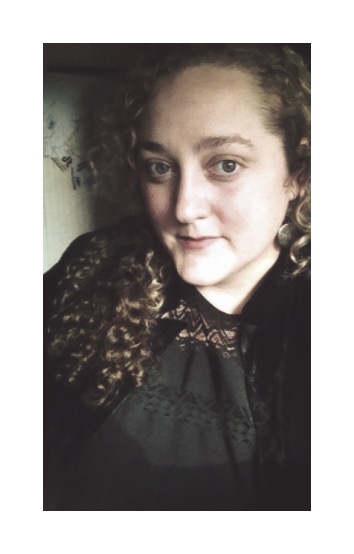 ﻿﻿Bio﻿﻿
Ms. Kirby is a native to Merced and an active participant in the arts community. She has a 7-year old son and a huge polar-bear of a dog. She loves comic books, magical realism and spring rolls!

Theatre Life
Kirby began her theatre life at Merced College's College for Kids Theatre Arts program (The Little Mermaid) then continued on at Hoover Junior High under Mrs. Sweeny's tutelage. As a student with that program she was able to perform in several plays and travel to London to tour William Shakespeare's home. In High School, she spent 4 years with the incredible Alan C. Bettis perfecting her improv, acting and serving as Thespian Troupe 594's President.
She continued Theatre into college and then branched out into creative writing, music and design. She continues to act in community theater and recently played Paulina in Merced Shakes production of William Shakespeare's The Winters Tale.

Professional Experience
From 2001-2008, Kirby wrote lyrics, tab and played bass in a touring Independent-Folk rock band. Recorded two full-length albums and head-lined at such venues as The Bottom of the Hill in San Francisco, Schuba’s in Chicago and Space Land in Los Angeles.  Aided in publicity, merchandise sells and national tour arrangements.
From 2003-2013 Kirby worked as a contracted artist through The Merced Multicultural Arts Center for both California's Very Special Artist and The Enrichment Center instructing creative writing, theater and visual arts.
From 2006-2015 Kirby served as a paraprofessional in the Merced Union High School District and student-taught English here at Golden Valley with Angel Rodriguez and Karen Davis.
Kirby has also served as a Playwright instructor for Young Peoples Conservatory at Playhouse Merced.

Education
Kirby began life after high school at Cal Arts, Valencia as an Art Scholar in Creative Writing, for the CSSSA Program. She then returned to Merced to attend Merced College and obtain her Bachelors of Arts in Literature and Culture with a Minor in Writing at University of California, Merced. She then pursued a Masters in the Art of Teaching with Credential in Single Subject English through University of Southern California, Rossier School of Education in Los Angeles, Ca.

Mr. Thomas, Artistic Director and Theatre Teacher
Email:  mthomas@muhsd.org
Mr. Thomas is a Merced native who grew up doing theatre in this town.  His earliest theatrical experiences were at Cruickshank Middle School with Mrs. Yvonne Field.  These early experiences in theatre sparked his love for theatre, and Mrs. Field continues to be a major source of encouragement.

Mr. Thomas attended Merced High School, where the drama department collaborated with Golden Valley to produce several shows every year.  Throughout high school, Mr. Thomas worked as an actor, lighting designer, stage manager, and as a member of the set crew in the Golden Valley theatre.  During this time, he had the opportunity to work with and learn from Mr. Alan Bettis (the theatre teacher at MHS) and Mrs. Julianne Aguilar, who would later become his coworkers, mentors, and friends.

He attended CSU Stanislaus, where he received a BA in English.  During his college years, he worked as the assistant theatre manager for the Merced Union High School District. This job afforded him the opportunity to work at both the Golden Valley High School theatre and the Buhach Colony High School theatre in an area he loves:  technical theatre, and especially theatrical lighting design.

After finishing college, Mr. Thomas moved away for two years to work on his MA in English at California Polytechnic State University, San Luis Obispo.  At the university, he also taught Freshman Composition, worked in the university Writing Center, and developed a love for teaching writing.

Mr. Thomas moved back to Merced in 2008 and began teaching English and English Language Development at Atwater High School, eventually becoming the Assistant Director of Theatre under Mrs. Aguilar.  Mr. Thomas helped create the new Atwater High School Black Box Theatre, and worked on such shows as Peter and Wendy, Scapino, and Pride and Prejudice.  After four years at AHS, Mr. Thomas moved to Golden Valley to take over as the theatre teacher.

His academic interests include studies in Shakespeare, American Literature (specifically the American Renaissance and American Dramatic Literature), and the teaching of writing.   In addition to working at Golden Valley, Mr. Thomas is President of the board at Playhouse Merced and an Associate Principal at GVHS.